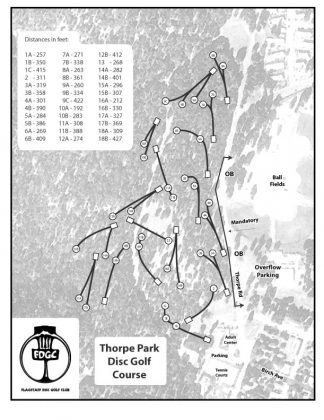 The Thorpe Park Disc Golf Course began as an object (tree) course in the 1990’s. During the latter part of the decade, Gary Bennett and friends pitched the idea to the City of Flagstaff to install 18 baskets, mostly following the path of the object course. Flagstaff’s first PDGA approved Disc Golf Course soon became a reality!

The baskets were installed in the Fall of 1998 along with natural teepads. Since then, the course has had concrete teepads installed, multiple sleeves added for alternate pin placements, and several trees were thinned. Some of the more competitive players began meeting on a weekly basis to play cash games, and thus began the humble start of the Flagstaff Disc Golf Club (along with the efforts of the course installation).

In 1999, club members organized the two tournaments including the Teva Open (now the Aspen Sports Treebash Open). Flagstaff’s first two tournaments were a huge success! Thanks to Jerry McLaughlin of Aspen Sports for stepping up to sponsor disc golf in Flagstaff and Lance Plummer for the tournament director duties.

The Thorpe Park Course is Flagstaff’s most heavily used course, featuring challenging holes winding through mature ponderosa pines and scrub oak. The course is available year-round and is free!

Little known fact: Hole #13 at Thorpe is the only hole with only one pin position. This was the original Hole #1 during the object course days and was the hole the course was designed around.

We're taking new pics of the courses! Stay tuned to our Facebook page and blog for new pictures and video.